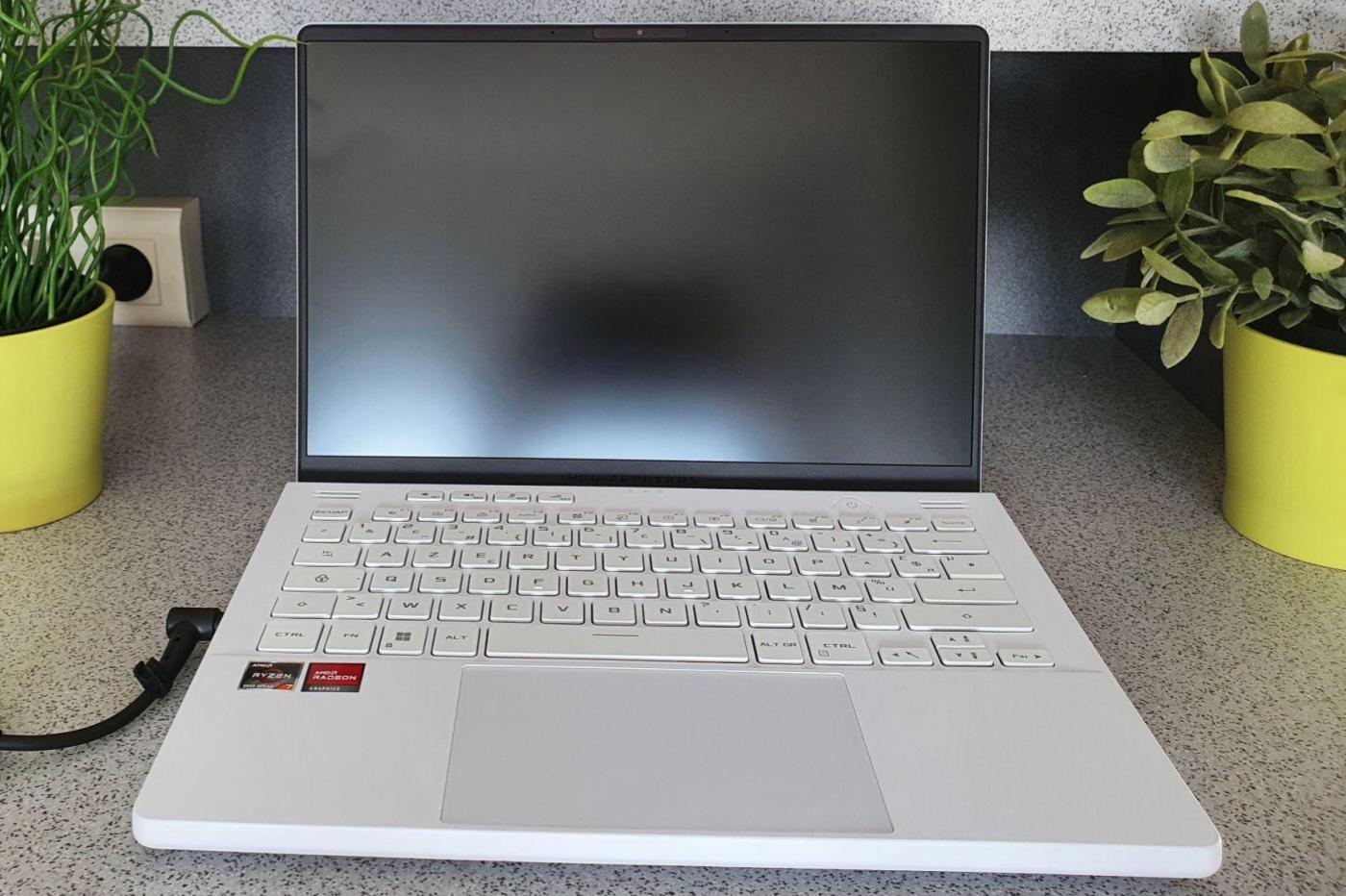 We were able to test the 2022 edition of the Asus ROG Zephyrus G14, a very beautiful gaming laptop that caused a stir at CES. Will this new version be able to rise to the occasion?

First impression out of the box: it’s a very nice machine. We find this chassis in white magnesium, almost invulnerable to fingerprints and particularly rigid while remaining light (1.65 kg); the overall build oozes quality, and it’s pretty hard to find fault with the finish.

In terms of aesthetics, like its predecessors, it remains rather sober. It does not scream its gaming identity for miles around, unlike the proposals of some competitors (yes, we are thinking of you, Alienware and others!). A good point for those looking for a device that is not too flashy.

The formula has however been modernized in a discreet way, but immediately noticeable in use. It starts with the move from 16:9 to 16:10, which is starting to take hold as the new standard; difficult to do without it once you have tasted it, and it is therefore a very appreciable development, as much for entertainment as for productivity. 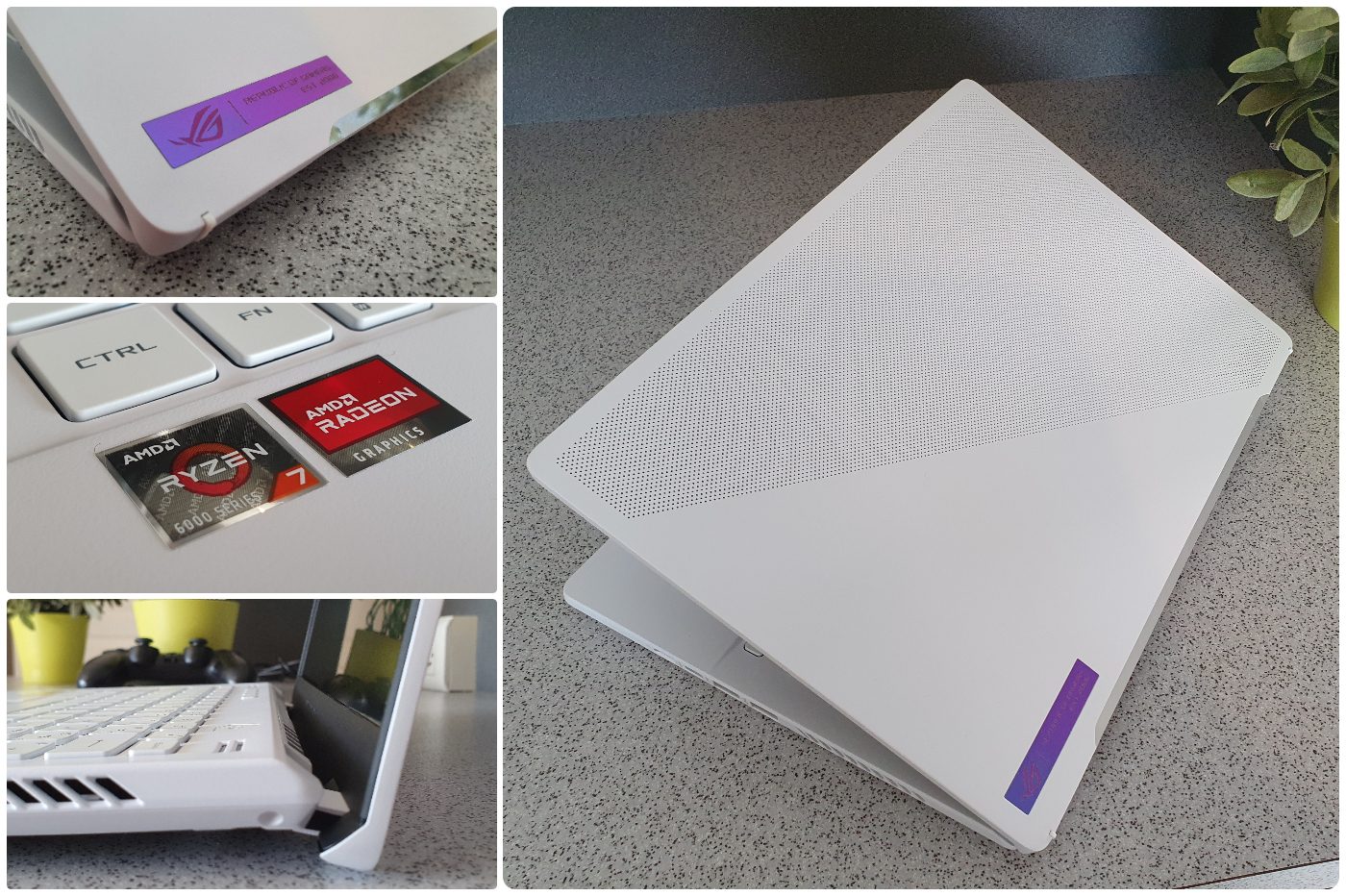 Screen: a slab that is not transcendent… but with a webcam!

Some will be disappointed to learn that this is an IPS panel; Too bad for those who were expecting OLED, especially since Asus has recognized expertise in this display technology. But overall, the screen is still of good quality.

The anti-reflective coating fulfills its role admirably well; it makes it possible to exploit the good colorimetric coverage of the machine (100% of the sRGB gamut) even in lighting conditions that are anything but optimal. A little extra contrast, however, would have been welcome. If it is not particularly illustrated, overall, this panel does not have to be ashamed of the competition, even if this is the lower resolution version (WUXGA 1920 x 1200 @ 144 Hz ) offered by the range.

This switch to 16:10 was also an opportunity to overcome one of the most glaring shortcomings of previous models: the absence of a webcam. Better late than never, the 2022 edition finally has the right to a small camera. And that’s the least you can do for a machine of this caliber.

Granted, it’s only 720p. But this at least allows you to use the Windows Hello facial recognition system to unlock your device in the blink of an eye. And incidentally, it will allow you to show off during your next videoconference. 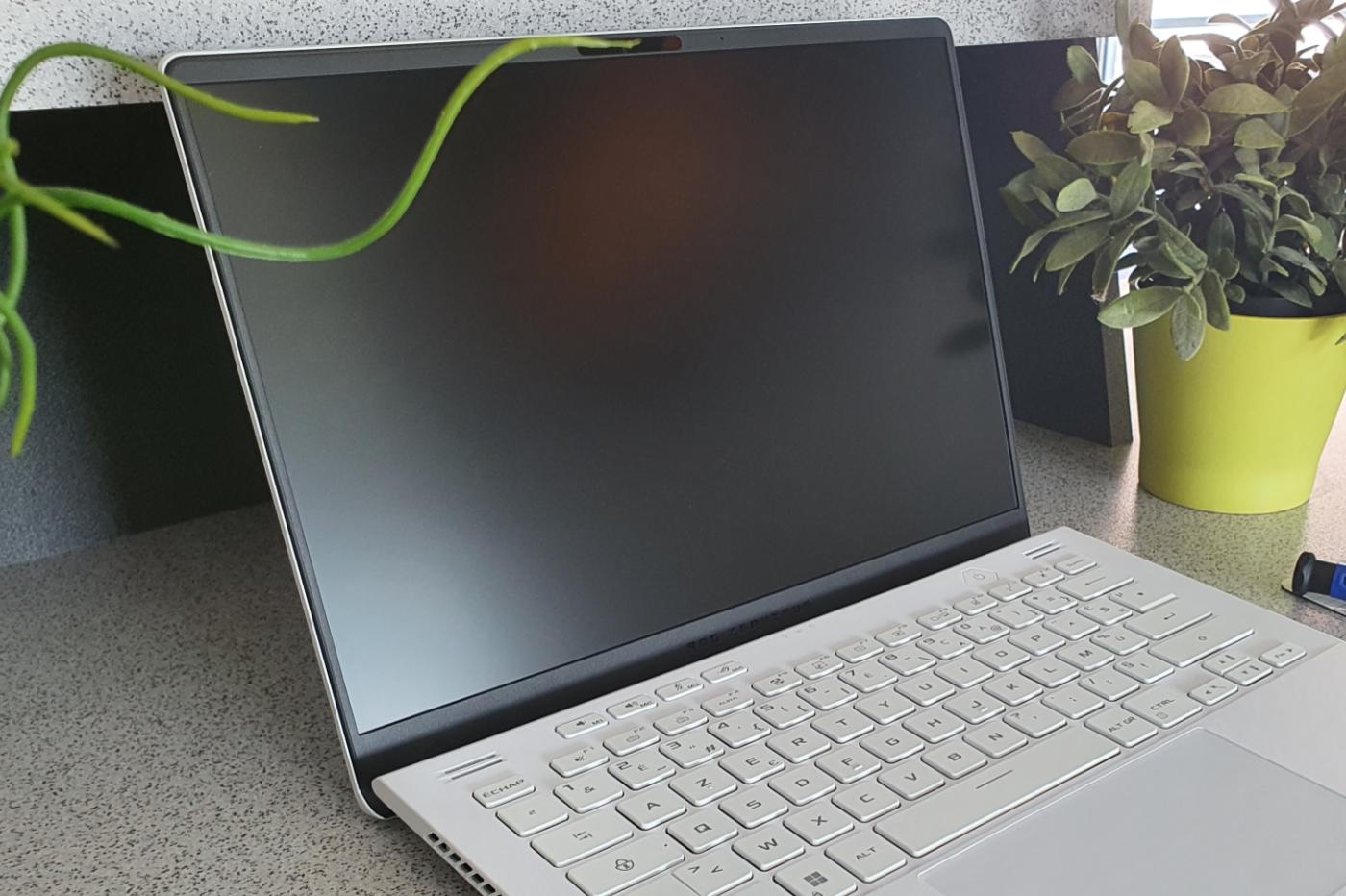 Sound: the good surprise of the day

Going down to the chassis, we then come to one of the real surprises of this model: the loudspeakers, with two front drivers and two subwoofers below. Usually, one can hardly expect the audio system built into a device of this kind to do wonders; but once is not custom, we were very pleasantly surprised, not to say downright impressed by those of the Zephyrus G14 2022.

On the video game side, they generally do honor to the original soundtracks. The spatialization is simply stunning for a beast of this type; we had no trouble locating enemies in Elden Ring or opponents in Rocket League by ear. On the content consumption side, the rendering is perfectly intelligible and even quite well defined compared to the filthy rendering of some competitors. Special mention to the Dolby Access utility which finishes rounding off the angles.

Inevitably, it remains a portable device; despite the presence of the subwoofers, you obviously shouldn’t expect any feats from them, especially as soon as you venture towards the extremes of the audio spectrum. As one might expect, this is immediately felt in titles with a grandiose soundtrack like Elden Ring; the soundscape is quite correct as long as you stick to background music, but the bottom and top of the spectrum tend to become difficult to discern as soon as you turn up the volume a bit. But it is still appropriate to salute the excellent work done here by Asus. We were even able to do without headphones for the duration of the test without it turning into a nightmare, and this is rare enough on a laptop to be underlined.

Noise: the zephyr continues to blow

Let’s take this opportunity to quickly mention another important element in the soundscape: ventilation. This is a point on which we were waiting for the machine at the turn. And for good reason: it was one of the more obvious Achilles heels of previous models, as our test of the 2020 edition shows. It was difficult to ignore it, especially in Turbo mode.

Fortunately, the 2022 edition is doing better. She even knows how to be downright discreet when you don’t put the system under pressure; in Rocket League, this G14 was able to maintain itself at 144 fps while remaining relatively discreet, if not completely silent. On the other hand, despite a slight improvement, many users will probably find that this G14 2022 is still too noisy to do without headphones during a long session of a resource-intensive game.

On our side, we couldn’t ignore it when the fans really started to blow, after a few tens of minutes on Elden Ring in Ultra quality. But what could be more normal for a machine that bears the name of the Greek god of the wind?

Keyboard and touchpad: the devil is in the details

We now come to the keyboard. Again, there are some subtle but welcome changes. We also find the overall layout of the previous models, with some small rearrangements that make the whole thing more elegant. First immediately visible example: the unsightly appendix that protruded from the space bar has finally disappeared! The directional keys have also been aligned with the rest of the keyboard, which makes everything much cleaner.

Changing the format has also freed up some space, and the keyboard is quite spacious to use for a 14” machine. Even if this aspect is extremely subjective, the whole is arranged in a rather ingenious and functional way. Special mention to the reprogrammable multimedia keys! 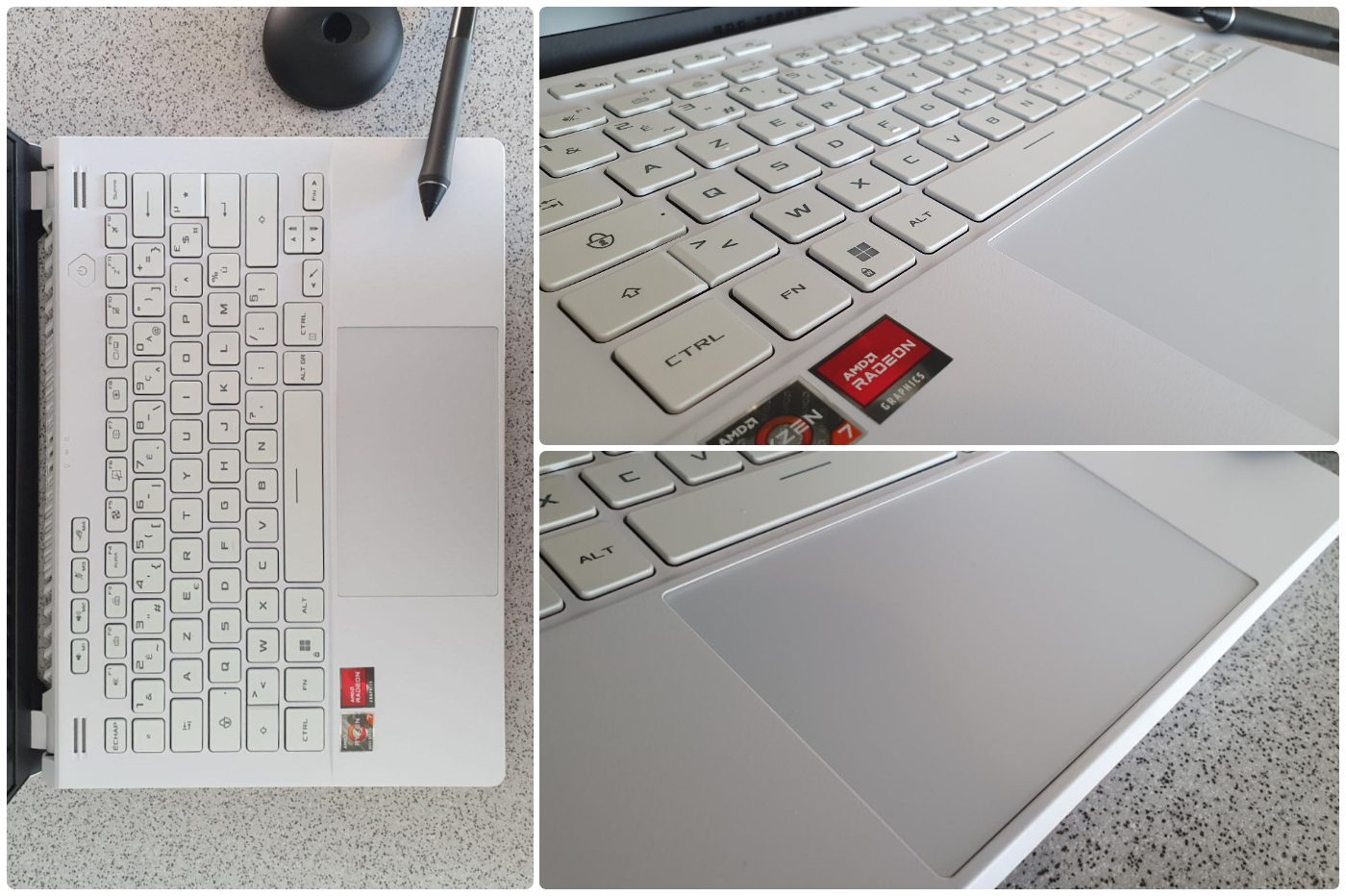 The travel of the keys is relatively generous, without being too long. It seems well dosed for all uses related to video games. It might be a bit too long to fully satisfy those accustomed to ultra-short-throw ultrabooks like MacBooks; but overall it’s a good intermediate can be used during long writing sessions. Note that the membrane is quite soft; moreover, the transition is not particularly marked at the time of typing, even if it remains perceptible. Two points that can be advantages or disadvantages depending on your habits.

The trackpad, on the other hand, does not suffer from any ambiguity: it is simply excellent at all levels. For starters, it’s significantly larger than on previous models; this very generous surface allows you to navigate without having to multiply your movements. But it is also generally irreproachable in use. Precise, superbly responsive and very pleasant to the touch, you have to be fussy enough to find the slightest defect.

The only potentially painful point in terms of ergonomics: the location of the power cable, which arrives directly in the middle of the left edge of the machine. A rather anecdotal point in practice, but which could slightly annoy left-handed users who work in places with severe space constraints, such as an amphitheater for example.

On the battery side, this Zephyrus also has quite serious arguments. As with all portable gaming PCs, you should not expect to be able to play a demanding game for more than an hour away from a power outlet. On the other hand, for a lighter use, the autonomy of the block of 76 Wh remains very correct once the device deprived of its umbilical cord.

Indeed, this G14 lasted 10:38 on benchmarks from LaptopMag, which has a huge database at this level. For comparison, this is more than double the average recorded by the site on dozens of models (4:21).

An impressive score, but to be taken with a grain of salt; obviously, the final autonomy will depend enormously on the personal habits of the user. On our side, the result was significantly lower, but still very satisfactory. In real conditions, we were entitled to just over 8 hours of consecutive operation with a use standard multimedia, although rather dense. We were then able to recharge the device at around 70% in about 40 minutes.

Then let’s get to the heart of the matter by exploring the bowels of the beast, starting with the connectors. The G14 features a 3.5mm combo jack and socket HDMI 2.0b full size. Furthermore, it has 4 USB 3.2 Gen 2 ports : two Type-A, one Type-C compatible DisplayPort, and one compatible Power Delivery + DisplayPort. Finally, a microSD UHS-II card reader completes the package. Add it Bluetooth 5.2 and Wi-Fi 6Eand you get a very correct connection that will suffice for the majority of uses.

Inside, it proudly sports the colors of the orange team with an AMD-stamped CPU-GPU couple. On the CPU side, our WUXGA model was equipped with a Ryzen 7 6800HS. This model has 8 cores for 16 threads clocked at 3.2 GHz base and up to 4.7 GHz in boost.

On the GPU side, AMD chose a Radeon RX 6700S, a model under RDNA 2 that flirts with Nvidia’s RTX 3070. The whole thing is completed by 16 GB of memory of excellent quality, namely DDR5 at 4800 MHz; note however that half of the RAM is soldered to the motherboard and therefore not replaceable. There is also a formidable M.2 NVMe PCIe 4 SSDSSD.

A small detour through a series of benchmarks is already enough to set the bar high enough. Cinebench R23 and 3DMark are unanimous; with flattering scores across the spectrum (see screenshots for details) in a 14-inch machine, this Zephyrus poses as a very serious competitor in this segment – ​​even if the “legendary” mention of 3DMark is to be taken with tweezers.

Game: an excellent experience despite the temperature

But these benchmarks were also our first opportunity to experiment on another essential aspect of this segment: temperature. As much to say it from the start, the machine tends to heat up considerably when it is stressed with great blows of benchmarks. After a good hour of testing, the temperature had become a bit uncomfortable at the level of the wrist rests, but also and especially below the machine. Not ideal for keeping it on your lap as warm weather approaches. Nothing unexpected on this segment, but we should not expect a revolution at this level.

And this observation is also confirmed in game; on gourmet titles like God of War and Elden Ring in Ultra, the temperature tends to rise quickly. Luckily, the huge vapor chamber still does a good job of raw performance. Admittedly, it is “only” a 1920 x 1200 resolution that is not particularly greedy, but the fact remains that during our test, we did not notice any thermal throttling At no moment.

So we were able to play in excellent conditions. By contrast, this model’s WUXGA resolution didn’t particularly pay homage to the lavish settings of games like God of War or Elden Ring; those who absolutely want an optimal experience at this level will have to fall back on the more expensive QHD + models.

But at least we were able to enjoy the gameplay smoothly, even on Elden Ring which is not particularly well optimized. In addition, the 144 Hz allowed by the screen will allow lovers of fast competitive games, such as Counter Strike: Global Offensiveto play under correct conditions. 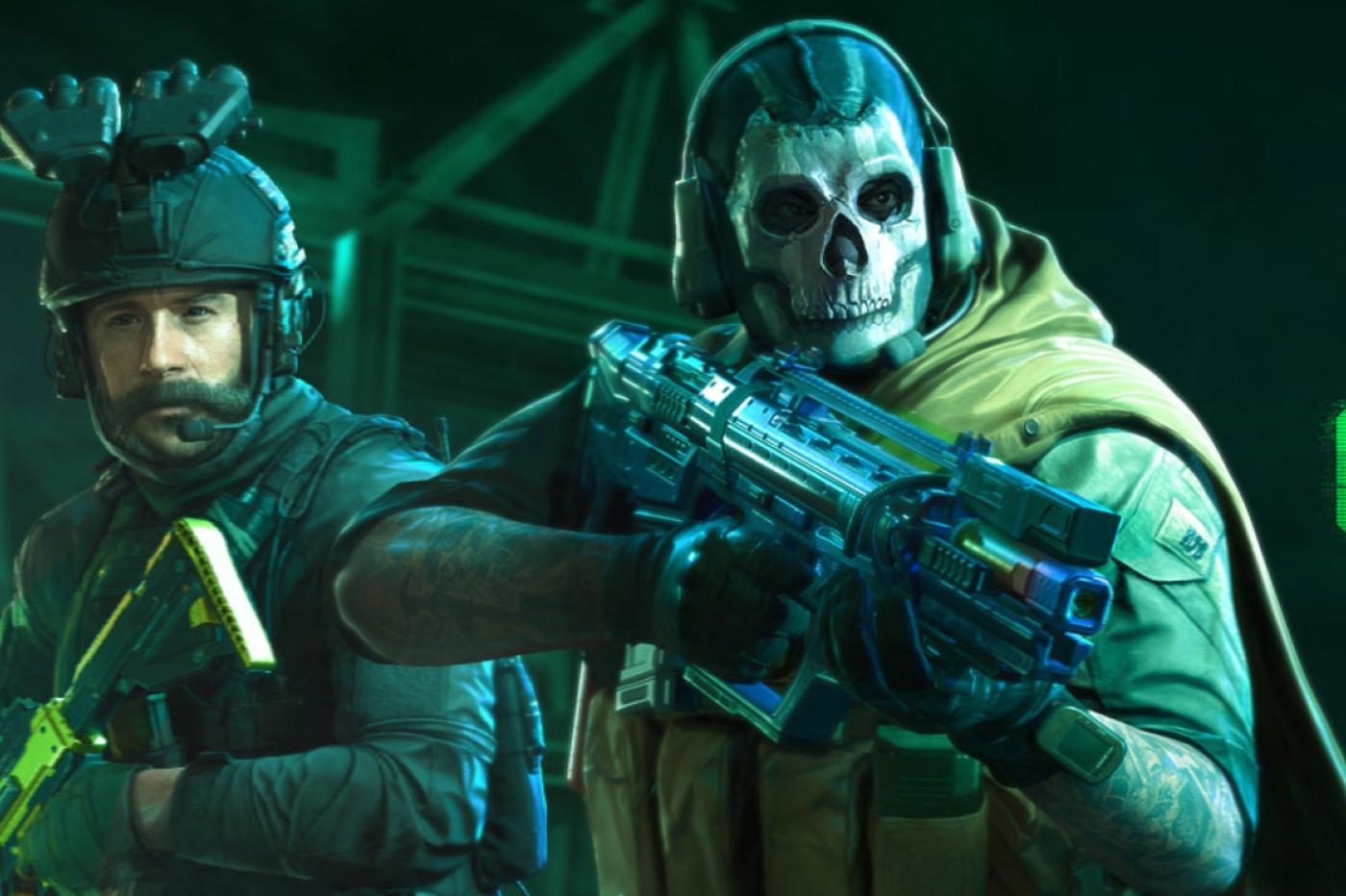 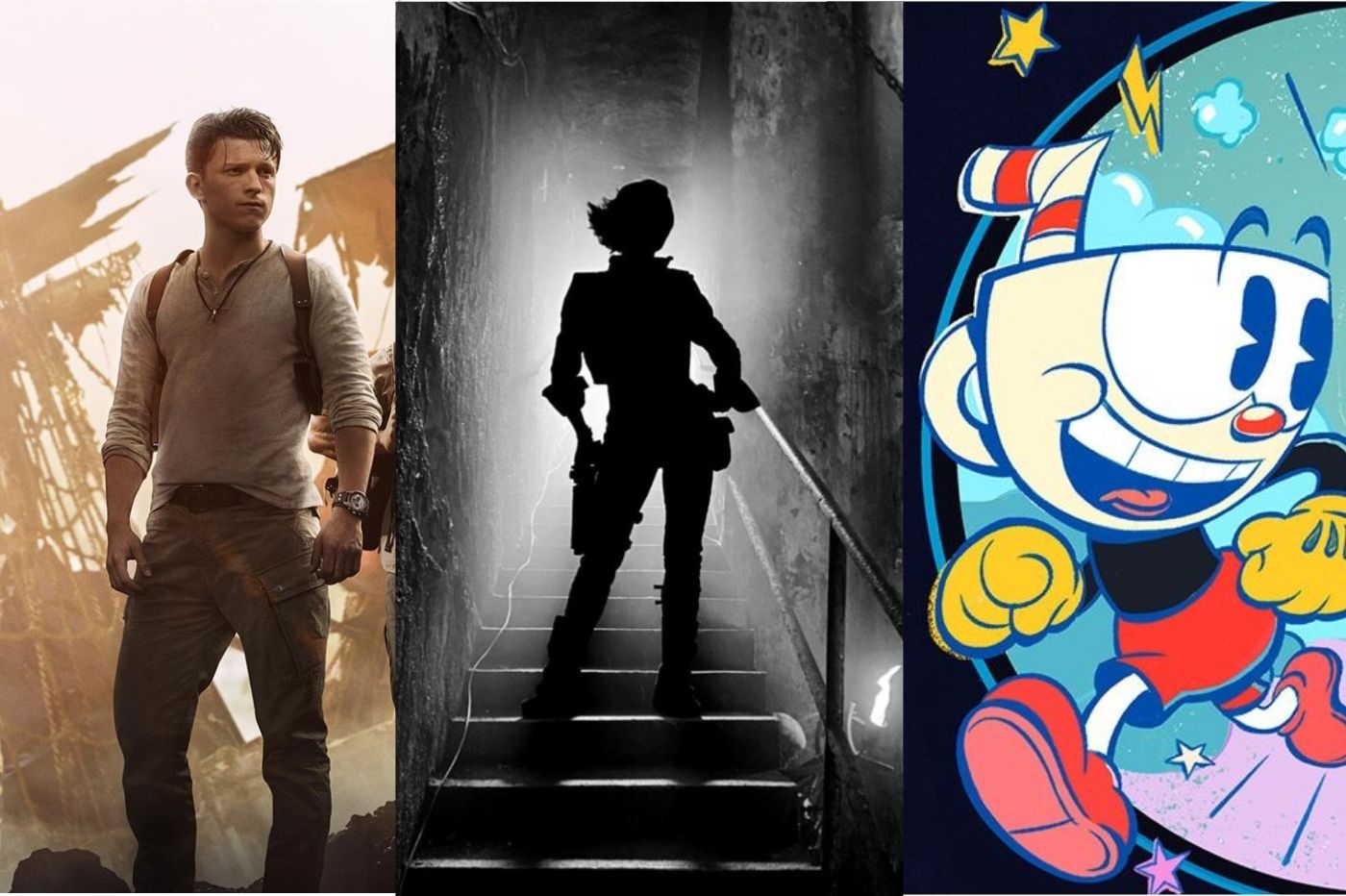 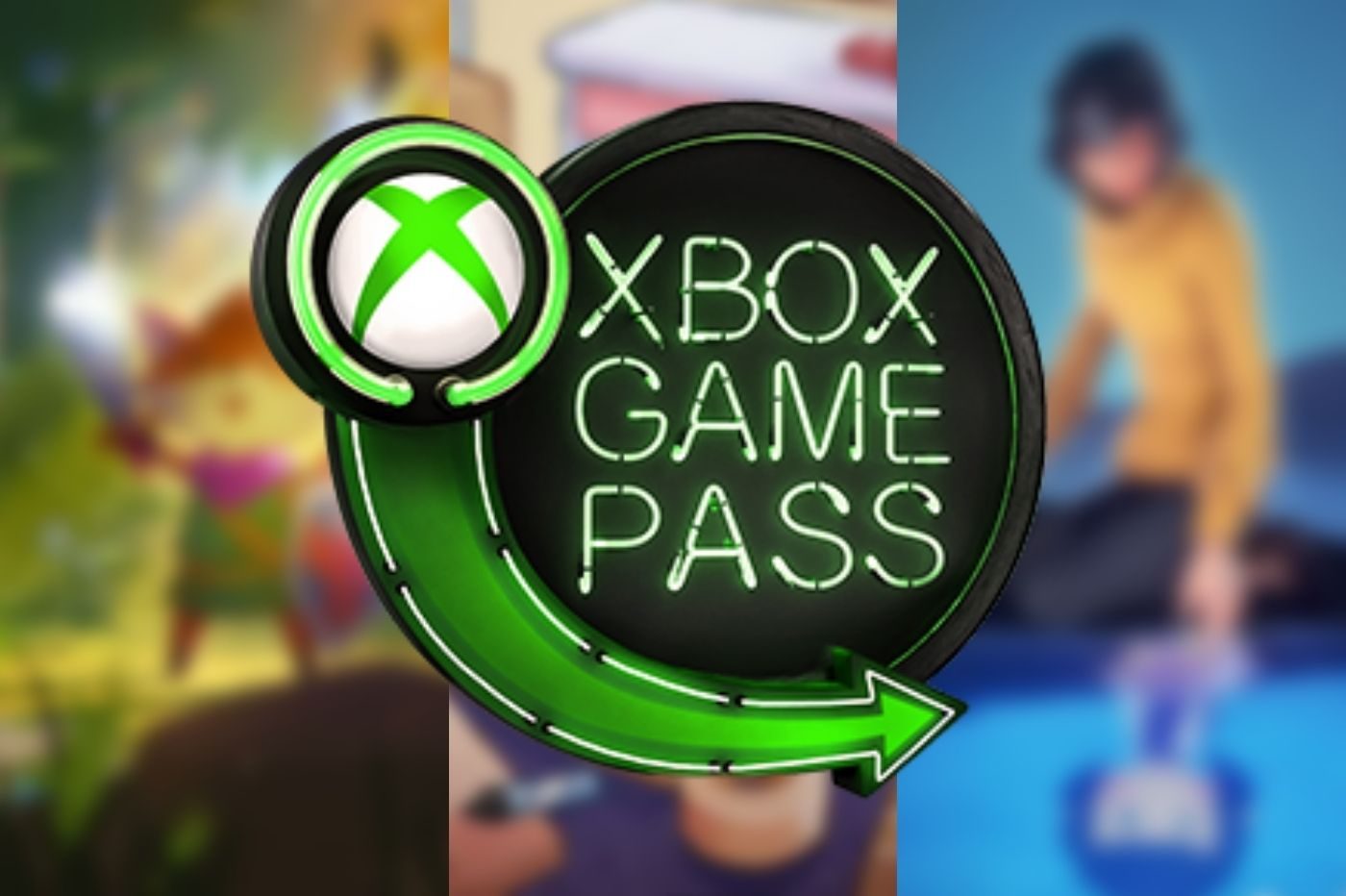 3 indie games you absolutely must try